One of the fascinating things when learning about history, is taking a step back and analyzing how different an event could formed had a different decision been made. That is what in essence, my group mates and I will try  to discern in regard to Carleton’s architectural history. What if Musser was not originally going look like a shoe-box (it really does look like a box)? Or what about the buildings that were proposed but never formed? In fact, my academic advisor even told me that once there was a deliberation on having phones installed in rooms or tunnels built to connect the dorms. Given the extreme Minnesota weather, tunnels should’ve won the debate, but cellphones had yet to make an appearance then, so phones it was. 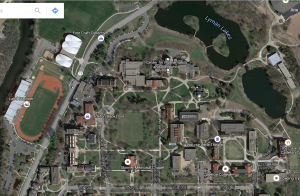 I wonder how different the aerial view would be had different decisions be made in regards to the buildings.

I think it will be interesting  to learn about Carleton’s history, and what could have been. It’s like you know a secret that no many know. But besides just knowing that secret of history, trying to remodel and viewing that campus in a whole different perspectives via a DH project will be fascinating.

You can read more about our project here.