At long last, the Carleton College Skinner Memorial Chapel hath been modeled! Here are some pictures of the finished product. 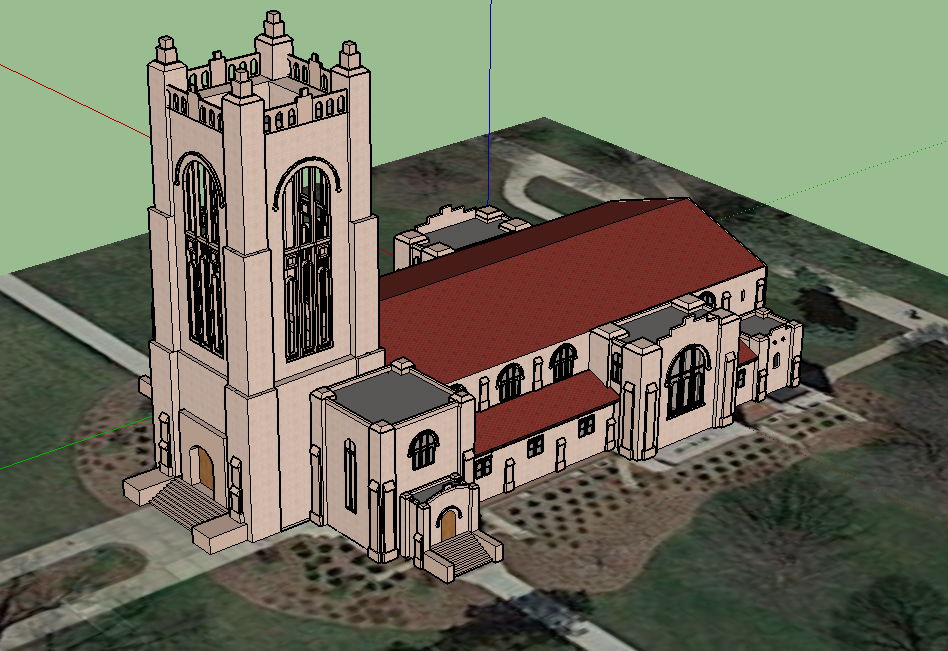 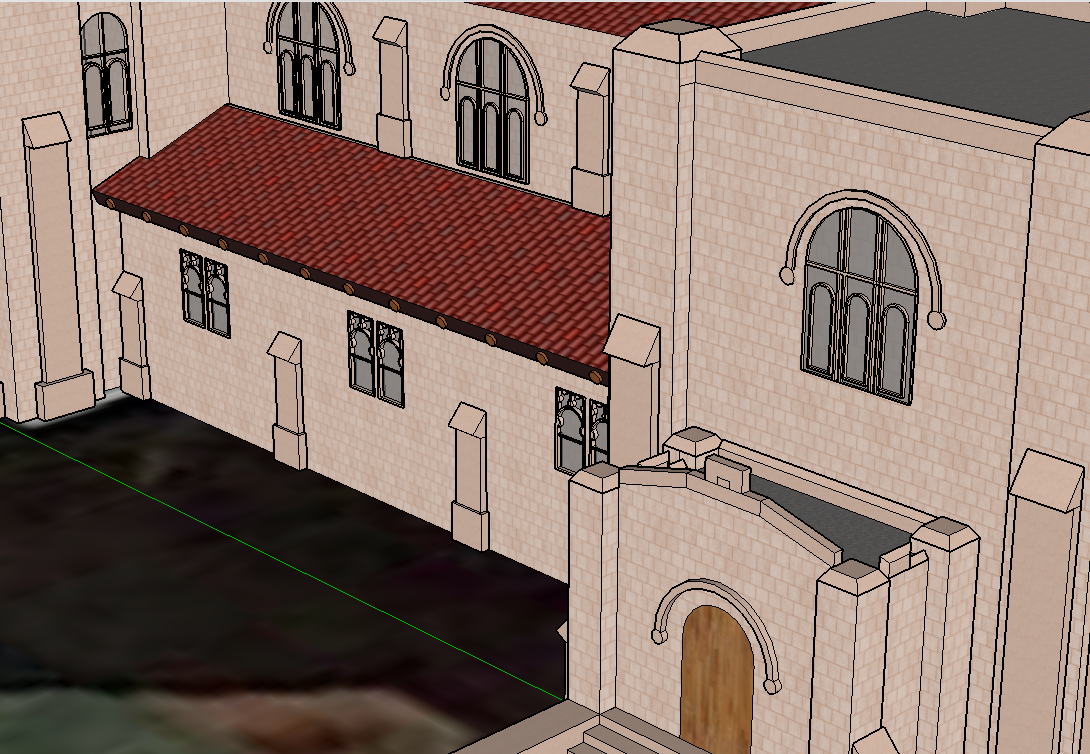 A view from the bald spot. 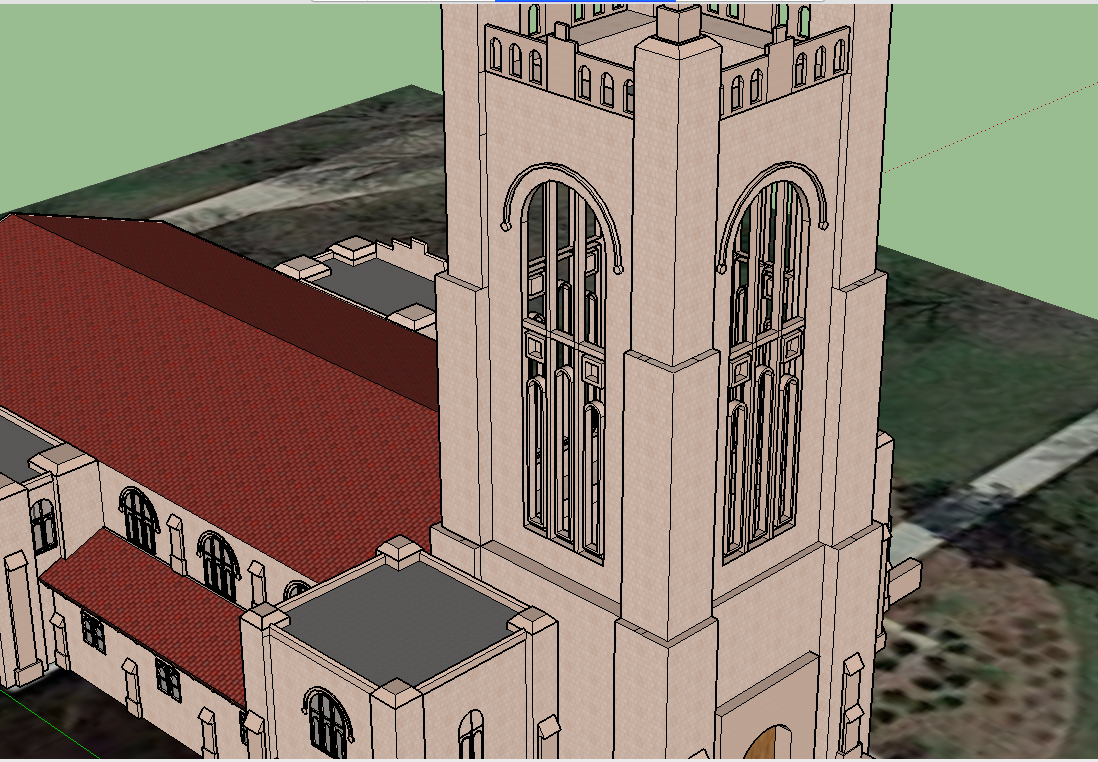 This proved to be an time-intensive but rewarding undertaking. I put the .skp file in a public drive folder which you can download and use as you wish.

Here are a few of the key challenges I had and lessons I learned. 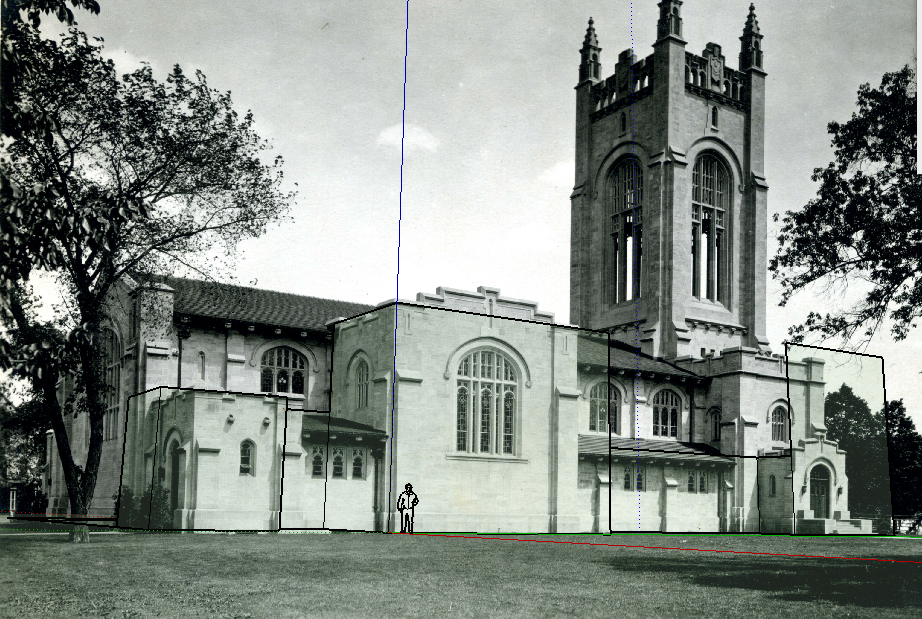 As I outline in my earlier post, I began the process by using the “Match New Photo” feature and the “Add More Imagery” feature to overlay archival photos and satellite imagery of the chapel. This helped me get the basic shape, though the imagery proved slightly deceptive. Using the old photos and satellite imagery, I never got the impression that the chapel was symmetrical until Austin (the professor for this course) pointed out that it is.

This was an exciting realization, because it meant I could focus on one side of the building and then duplicate that work. But it also meant I had to spend some time adjusting things (I had originally placed the tower off to one side.)

So my caution is to be a little skeptical of a flat satellite image and old photos– this images may be distorted. If at all possible, it is good to also see/use recent images or just go look at the building to make sure you understand the general premise of the building (ie, that it is symmetrical) before using photos to help with the details. 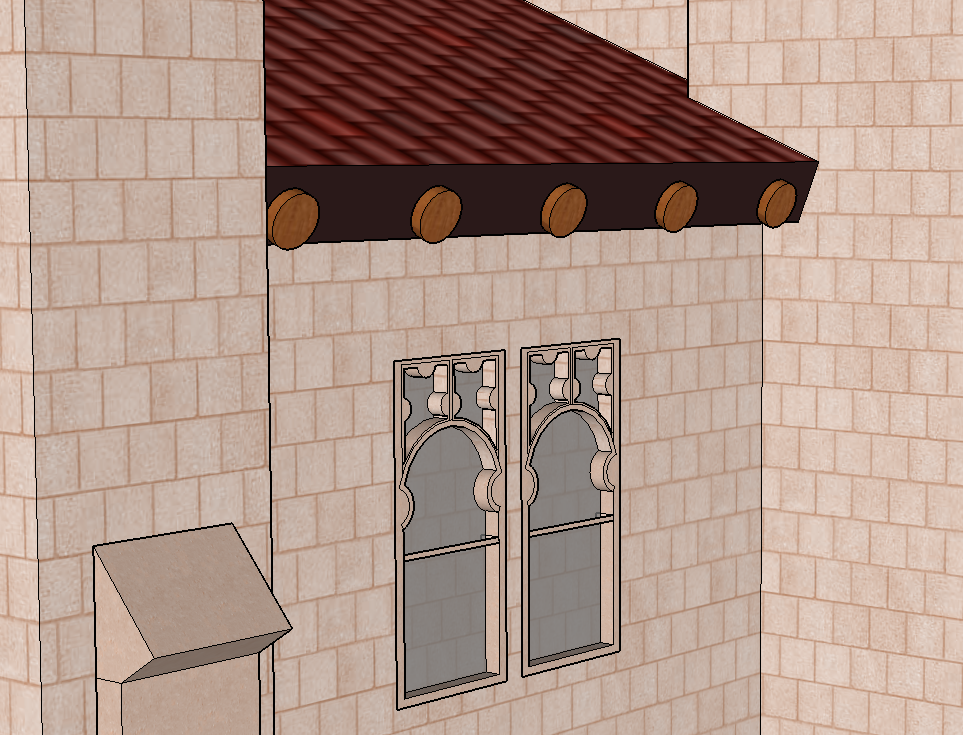 Windows were tricky because they involved indentation. For a typical window, I would indent the window portion, and leave the trim/border portion at surface level. This was pretty easy, but I had two main issues:

Two solutions I can offer: 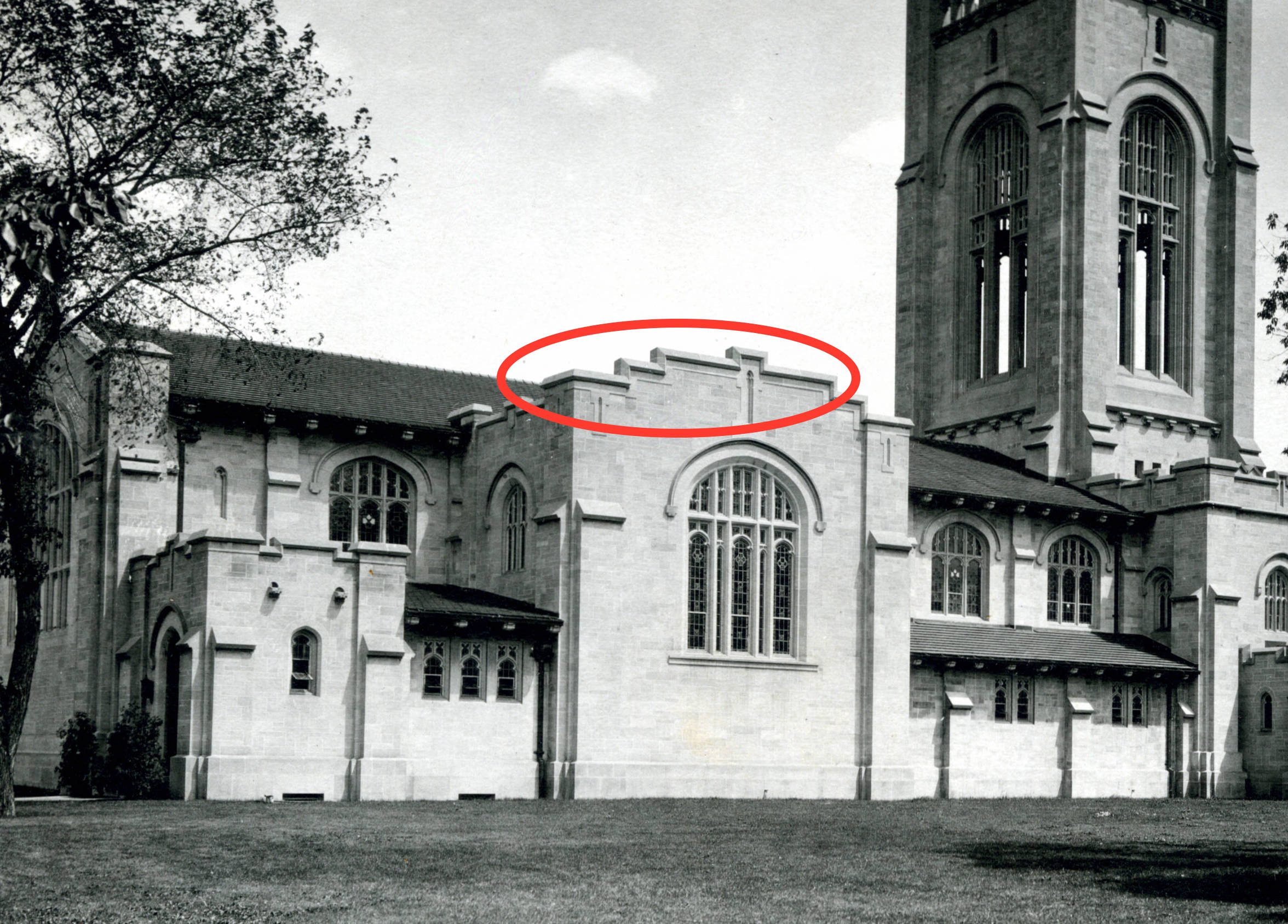 One aspect of the building I found surprising difficult to emulate is the “trim” that you can see running along the top of the pillars and protrusions, such as the region circled on the image above. 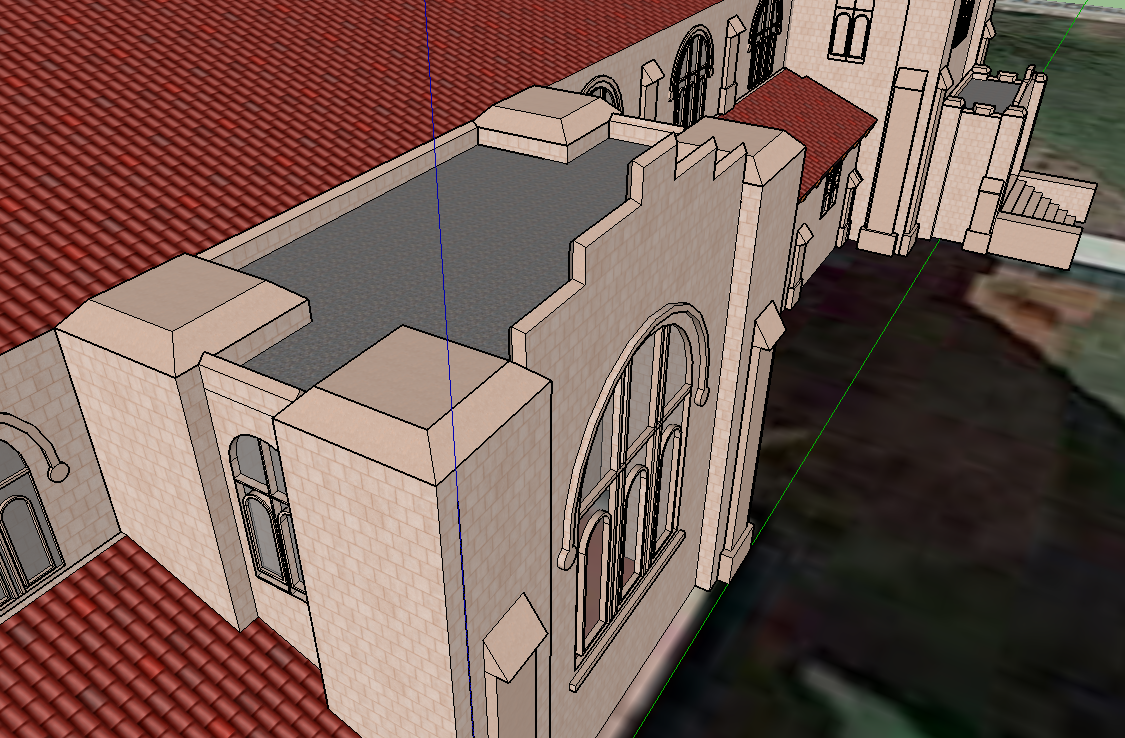 What I ended up doing was creating “caps” on top of the pillars, and a pointed ledge like you can see above.

I think this tactics captured the essence of the trim, but they were not entirely accurate. As you can see in the photo, the actual trim protrudes/overhangs a little from the wall surface. I could not figure out an elegant/effective way to mimic this.

One final thing I will say about my model experience is that precision is key! Typing in exact values, using the midpoint reference marker, and ensuring the should-be identical components really were duplicates of each other always proved to be very helpful down the road, and failing to do these things always created problems down the road. 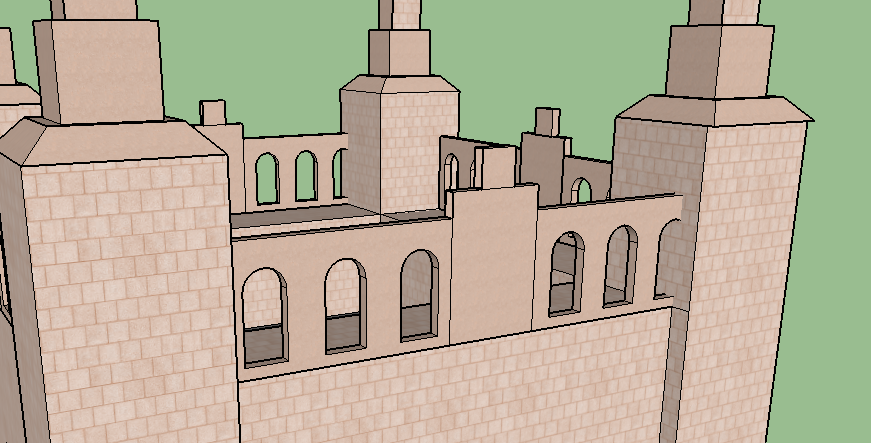 You can see that the railing section, between the two pillars doesn’t fit quite right–the end is cut off. And you can see the “cap” sitting atop the right-hand pillar doesn’t quite fit right either. This is because the pillars aren’t all the same size– I drew them by hand rather than mathematically. As a result, when I tried to copy components like the railing or the cap– to duplicate my work and reduce redundant effort– they didn’t quite fit right.

The model was already far overdue and so I decided to let that minute detail slide. But the example serves to illustrate that drawing elements precisely (using numbers rather than your eyes) it tends to save time in the long run.