I got as far as I could with mapping West Gym. The overall process was a pretty big headache for me. The most defining feature of West Gym is the parabolic roof, which is next to impossible to build in Sketchup. As I mentioned before, after hours of trying with the regular set of Sketchup Tools, I downloaded the Soap Skin extension, which allows you to create things like bubbles or curved surfaces.

Ultimately I ended up creating a different sketchup file from my original and playing around for a few days. This is where the majority of my time was spent, rather than on detailing like wall color. I had a lot of trouble getting things to behave the way I wanted them to, despite watching a lot of tutorials on the subject. I used the rotate and copy tools pretty extensively, as well as lots of maneuvering around axises and frequent undos. My roof began something like this: 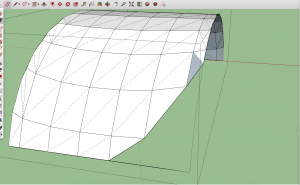 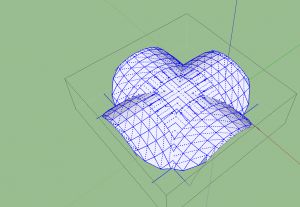 I then copied over my file and scaled it up, as well as moved it around. 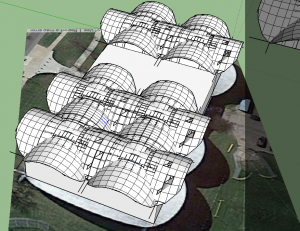 The next part of the process was to smooth the roof and make it look more like the top of West Gym, as well as add details.  I really struggled with this part. Because my sections had so many pieces, they did not smooth well by hand and took a long time. Ultimately, I did not completely finish the model. 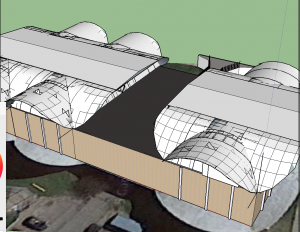 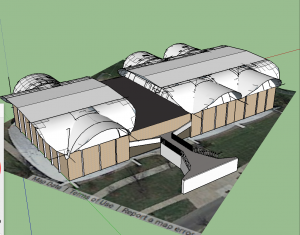 I’m pretty proud of what I learned and the amount of work I put into everything. However, I wish I would have been better at time management or asked for help while I was struggling with the roof, since it led to me being unable to properly complete or smooth the model over. Overall, this was definitely a learning experience and gives me a new appreciation for architects who not only design these buildings, but most likely build them in a design program similar to Sketchup.