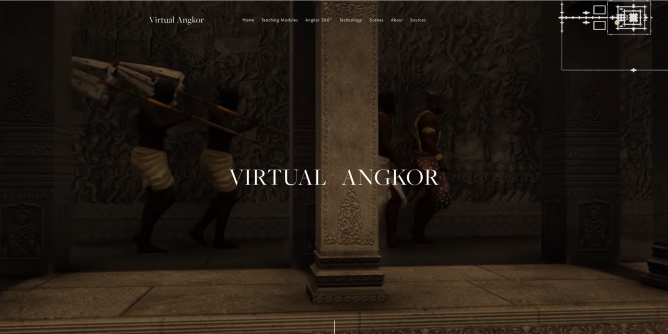 The Virtual Angkor project attempts to reconstruct the medieval Cambodian city, Angkor, through a wide range of visualization techniques that include 3d modeling, simulation, and animation. This project was developed through a combined effort of both History and IT scholars: with the Sensilab team at Monash University collaborating with History scholars from Duke and Flinders University. This project aims to bring a living, breathing city into the classroom through a digital reconstruction of contemporary society, complete with animated inhabitants, detailed architectural depictions and vegetation.

How was this project accomplished? Let’s break down this project into the three steps identified by Miriam Posner : sources, processes, and presentation.

The website elucidated the challenges they faced when gathering sources about the Angkor and the Khmer Empire. Despite the abundance of geography and architecture data at about Angkor, there is a minimal amount of written primary sources from the same period.

The website mentioned that one particularly important written record was the first-hand account written by the Chinese diplomat Zhou Daguan. The site also briefly discussed how researchers pieced together Zhou’s experience during his life, hoping to understand how his upbringing play a role in his perception and written account in Cambodia.

Aside from the primary sources of Zhou Daguan, the project also mentioned a large variety of published journals and printed books as part of their secondary sources. The website also provided links to these scholarly resources next to their visualizations on the site.

The researchers on this project used a wide range of techniques to recreate the “24-hour cycle in the life of thirteenth century Angkor Wat.” They used multiple kinds of techniques to create 3d computer-generated visualizations, one method they used is 3d scanning. The team scanned physical Angkor artifacts and handcrafted them later in VR. Motion captured animations were also used for specific simulations.

The website, meanwhile, did not mention what software or hardware they used during this process. I do understand that the complicated nature of this project would discourage the authors from elaborating the specific digital procedures on the website. This site is also not open source. However, I do believe that this project has large commercial potential. 3d modeling and animation are laborious, time-consuming, and expensive. I can see documentary makers reaching out to researchers of this project to purchase rights to some of their videos.

The result of this project is a marvelous combination of 360-degree videos viewable from the computer and immersive virtual Reality experiences. The 3D city generated can help researchers to understand historical texts and archaeological surveys from a new perspective.

It might seem like this site does not pose an argument. The tricky part about 3D simulations of historical past is that their existence can be viewed as a form of “argument.” When creating the entire atmosphere, the scholars need to decide the “reality” in the virtual world. Despite the intentions of the authors, the audiences might perceive the virtual world as the “reality” presented to them.

This work is licensed under a Creative Commons Attribution-NonCommercial 4.0 International License.

Please feel free to reuse any portion of these materials that you like.

All work on this site is licensed CC-BY-NC https://creativecommons.org/licenses/by-nc/2.0/