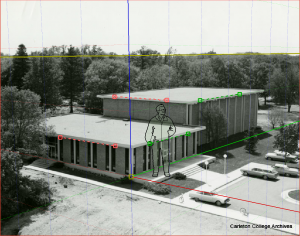 I made a stab at trying to model the Elizabeth Cowling Recreation Center using google Sketch Up. Under the camera tab, I selected “match new photo” and chose the photograph above in finder. I then set the different axis’.

I started from the top of the building by selecting the roof with the rectangle tool. Next, I used the Push/Pull tool to pull it down to the correct length based on the photo.

The next step was tricky. To make the walls of the building, I used the offset tool and orbited so that I was viewing the underside of the roof. I put in a length of 2 feet and pulled it down. Once I could see the picture again, I could see that the length was too large. I tried again changing the length to 1.5’, 1’ and 10” until it was matched. It was frustrating because the photo is only available from one point of view. Using the orbit tool makes the photo disappears and all you see is the shapes you’ve created in Sketch Up.

This process was much different and more difficult than free form modeling. It was very frustrating to use the components feature for the windows. Not all the windows were the same length apart and after many tries I was still unable to get it correct.

I also was surprised when projecting the textures from the photo onto my 3D model and seeing that the default person from Sketch Up to show scale had been painted instead! It was as if someone threw a bucket of paint at the wall and he was in the way. There was a perfect white silhouette of the old man on the wall of the gym. 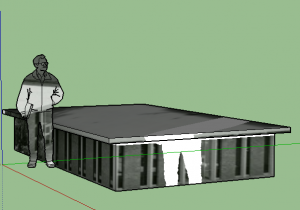 Modeling this building in 3D gave me insight to the differences in the 2 sections of the gym. One is taller than the other but it didn’t seem like anything special until I started the modeling process. You can see the shorter portion of the building on the right.