“Mapping the Republic of Letters” is an exciting DH project created by a group of students and professors at Stanford. At the basis of the project is The Republic of Letters– a community of Enlightenment-era scholars including Voltaire, Galileo, Ben Franklin, and John Locke, that exchanged ideas across national borders. The aim of the DH project is to provide insight into way members of that community interacted, by analyzing and illustrating their communication trends. We can better understand how the DH project works, by employing Miriam Posner’s process of breaking the project down into sources, processes, and presentations.

The project analyzed correspondence data for several different figures. The source data for each figure varied, but generally was some kind of database of letters they exchanged. For Voltaire, this database was provided by the the Electronic Enlightenment Project at Oxford University. For Franklin, that database was found online at FranklinPapers.org.

The processing of this data generally took the form of cataloging available information about the letters a particular person exchanged into a spreadsheet. For example, the Franklin group extracted information such about each letter including “its date, its author and recipient and their genders, communities (aka “professions” in an eighteenth-century sense of the word), and places of birth; its source location and the location of its recipient.”

Some groups separated these records into two spreadsheets, one containing information about the letters themselves, and one containing information about the individuals on the other end of an exchange. It seems further research was sometimes required to fill out this second spreadsheet. For example, the Voltaire group wanted to know of Voltaire’s correspondents “What were their occupations? What was their milieu?”

Part of processing also included choosing a date range within which to analyze.

For example, the Voltaire group created this interactive map to allow people to visualize and explore where letters where being sent and received: 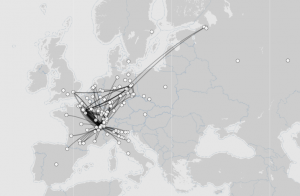 Graphs were another common way to present information. For example, the Franklin group created this series of pie-charts to illustrate the origin country of the various letters Franklin received with a date range. 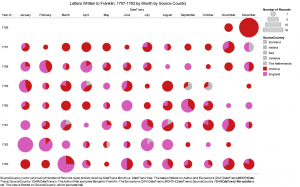