For the next two weeks we will be exploring the spatial humanities — a vibrant and increasingly popular area of digital humanities research.   Humanities scholarship is currently undergoing a “spatial turn” akin to the quantitative, linguistic and cultural “turns” of previous decades, and many are arguing that the widespread adoption of Geographic Information Systems (GIS) technology and user-friendly neogeography tools are fundamentally reshaping the practice of history and other disciplines.  Yet while these powerful computer tools are certainly new, the mode of thinking “spatially” is not unprecedented, and may in fact be seen as a move away from the universalizing tendencies of modern western scholarship towards more traditional understandings of the lived experience of place, emphasizing the importance of the local context.

In practice, much of this scholarship involves creating maps — an act that is not without controversy.  Maps are conventional representations of space that come laden with the embedded cultural worldviews of their makers.  Maps are also highly simplified documents that often paper over contested or fuzzy boundaries with firm lines; it is hard to express ambiguity with maps, but it is very easy to lie with them.  The familiarity of widespread tools like Google Maps and Google Earth might fool us into thinking these are unproblematic representations of space, but it must be remembered that all maps contain embedded assumptions and cannot be taken at face value. Maps produced in the course of humanities scholarship are not just illustrations but arguments, and they must be read with the same level of critical analysis that you would apply to articles or monographs.

(For more concrete suggestions along these lines, see the just published Humanizing Maps: An Interview with Johanna Drucker.)

One area of historical research that saw an early adoption of GIS is economic land use.  A good example is Michael McCormick’s book on the Origins of the European Economy, which layered many different types of evidence against each other in a GIS to argue for a much earlier origin to Europe’s medieval economy than had been accepted previously.  McCormick has since made his database publicly available and continues to add to it with collaborators at Harvard, as the Digital Atlas of Roman and Medieval Civilization. 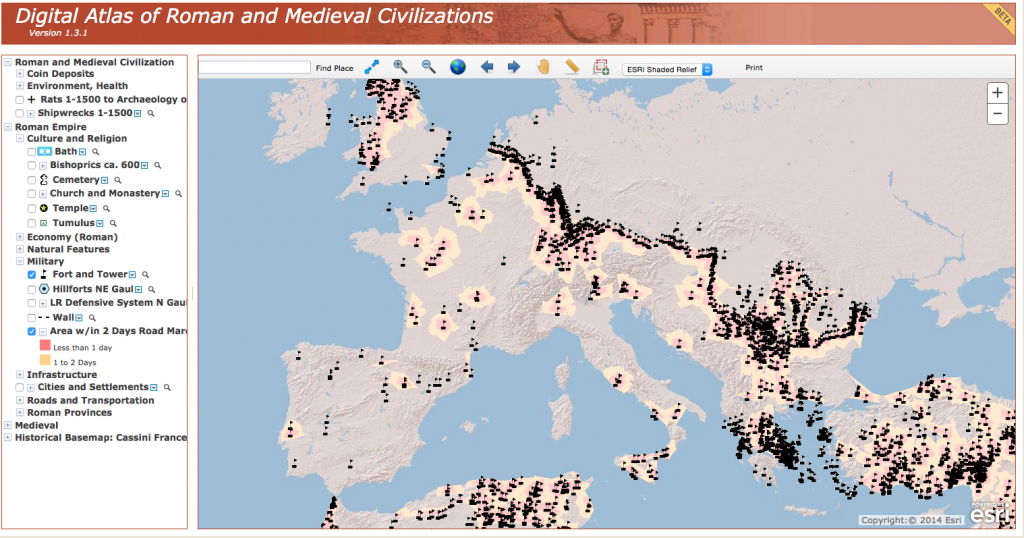 The DARMC provides a rich resource and a good introduction to the potential of GIS to reveal patterns and connections through the spatial layering of disparate datasets.  It also offers a good orientation to the basic layout of most GIS systems, with a map view window on the right and a list of layers on the left that can be turned on and off.

The quantitative data compiled in projects like the DARMC can help address many historical problems, but they don’t necessarily answer more qualitative research questions concerned with the lived experience of the past.  For this objective, we must move beyond birds-eye-view 2D maps of spatial distributions and attempt to visualize particular places at particular moments in time.  Such “geovisualization,”  the digital reconstruction of past landscapes, is another booming area of scholarship that allows us to virtually experience a place as it might have been, and also has the potential to answer important scholarly questions. 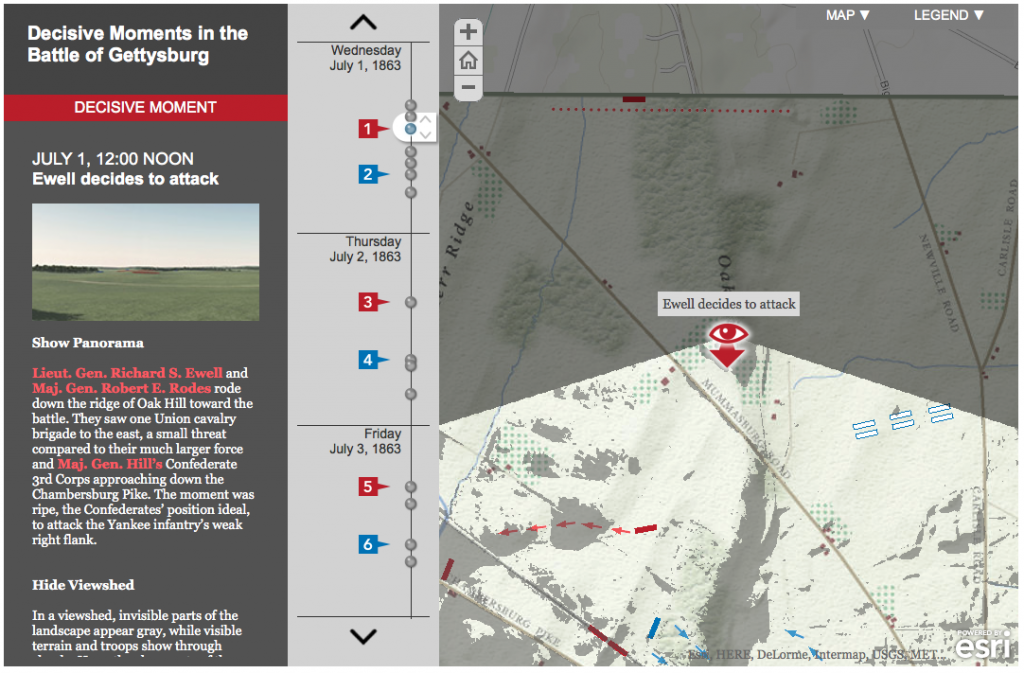 Anne Kelly Knowles’ digital reconstruction of the Battle of Gettysburg is an excellent example of this potential that uses a combination of digitized information from historical maps, documentary accounts and environmental data on the physical geography of the battlefield to answer the question of what the generals could see during the battle and how those sightlines influenced their decision making.

Group Exercise: The Varieties of Maps

The next step is to become familiar with as wide a variety of maps as possible, including digital maps and analog, maps that have been made by scholars and maps that have not. Below is a list of online mapping projects.

In a group, pick three projects from the list to explore and compare. Your aim is to gain familiarity with projects involving maps and mapmaking, both by scholars and on the web generally.

As you look through these projects, consider the following questions or prompts.

Lincoln Mullen of the Center for New Media and History at George Mason University has developed a fantastic resource for getting started with mapping for the humanities.

The Spatial Humanties Workshop site he developed will give you a detailed introduction to the different types of maps you might want to make as a digital humanist, the software and libraries that are out there to use, and most importantly the academic issues and theoretical questions that are raised by mapping humanities data in a digital space.